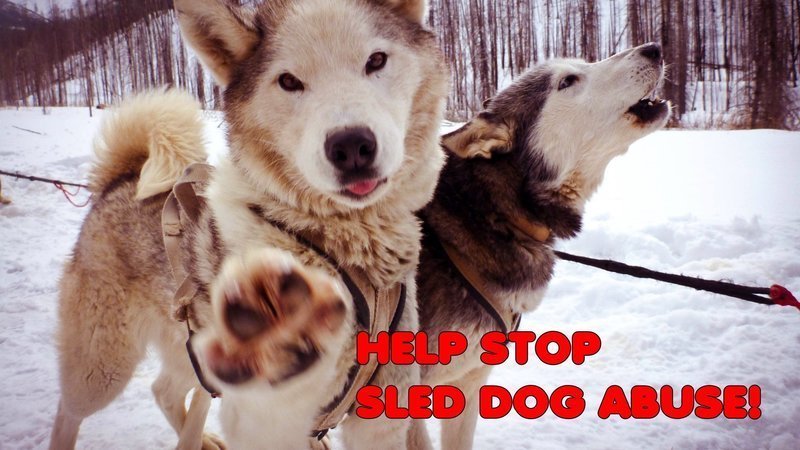 
CANADA’S DIRTY LITTLE SECRET: Sled dogs are some of the most abused animals in the world. There is this myth that they can handle a 1,000-mile race but the truth is they are often run to death and when the race is over the dogs go back to life on the end of a chain wearing thick fur coats as they sit in the blazing heat of the midnight sun.

The media tries to muffle animal rights advocates and brainwashes the public into believing that long-distance sled dog racing is just great family fun – an endurance sport. The Yukon Quest is NOT a sport – it is an event in which animals are exploited and die. The ugly truth about the deadly Yukon Quest is Canada’s dirty little secret. It is a secret the Yukon Government doesn’t want you to know about. ~~> Sled Dog Racing is Inhumane!

THE YUKON QUEST – THE MYTHS THE FACTS

YUKON QUEST SUPPORTER: “The Yukon Quest is not inhumane! The dogs love it!”

POET LAUREATE OF THE YUKON: Ever watch a dog cross the finish line with blood coming down its chest? I have. I am a northerner. I’ve been to the kennels, I’ve smelled the stench, and I’ve seen the horror. For anyone who doesn’t think long-distance sled dog racing is inhumane I have two words for you: DOGS DIE! And they don’t die pretty. They die in agony. If the race is so safe why are dogs continuing to be run to death? ~~>  R.I.P. Joker 2019

COMMENT MADE ON THIS PETITION BY A VETERINARIAN: “Having worked in veterinary medicine for decades I understand that these dogs are high energy and love to run but this race is too extreme. This race exceeds all safety limits and dogs suffer and die because of it. We cannot exploit them for our sport or our entertainment.”

YUKON QUEST MUSHER: “The Quest and the Iditarod are based on northern tradition and First Nations culture.”

FACT: Exploiting animals was never part of northern tradition or first nations’ culture. Yukoners care deeply about the land and the animals on it. The government has enshrined this event into the mindset of the public and made a ton of money sponsoring it. This barbaric race which features the blatant abuse of defenseless animals should not be allowed to run across sacred 1st Nations traditional lands & territories.

IDITAROD MUSHER: “The Iditarod is a tradition based on the 1925 serum run.”

FACT: The 1925 serum run was NOT a thousand-mile race. It was a sled dog relay using 20 teams operating in relay to deliver serum to Nome Alaska during an epidemic. Lives were saved and no animals were harmed.

IDITAROD MUSHER: “I love my dogs.”

FACT: If you care about an animal you don't deliberately put it in harm's way. Very few of the mushers who compete in the Yukon Quest are actually from the Yukon. Many are from the US and elsewhere. They consider themselves professionals and compete in the Iditarod and other races. To them it’s a business. Many own kennels where they breed & sell 'champions'. They also get dogs from rescue shelters and cull them after the race. They kill them so they don't have to maintain them year-round.

SLED DOG ACTION COALITION: IDITAROD MUSHERS DROWN INNOCENT PUPPIES! Iditarod mushers have drowned shot, bludgeoned and dragged dogs to death. Dave Olesen drowned a litter of newborn pups. One musher got rid of newborns by tying them in a bag, tossing it in a creek. Mushers have a saying: “Those who cannot drown should not breed."

YUKON QUEST MUSHER: “The dogs are born to do this.”

FACT: The official Yukon Quest race veterinarians claim it’s ok for a dog to run 1,000 miles in brutal arctic conditions in 40 below temps – even when they already have frostbite! Their ‘vet checks’ are a JOKE! Often the condition of the dogs before the race is bad enough to kill them yet the race vets give them the go-ahead to run a thousand miles! Last year it was minus -41 below when hundreds of dogs left the start line in Whitehorse Yukon. Many already had frostbite.

Animals are sentient beings. They feel love and joy and pain just like we do. We have no right to cause them even a second of harm. Sports and entertainment events like the Yukon Quest foster the exploitation and abuse of animals.

FUTURE GENERATIONS WILL CONDEMN THIS EVENT! The death toll is MASSIVE and it keeps climbing as sled dogs continue to pay with their blood. We need to speak louder to create a powerful and indelible worldwide awareness that will stand for generations and let the world know that the heartless abuse of these defenseless animals will not be tolerated!

STEPS TO A MORE HUMANE WORLD! It was recently announced that Queen Elizabeth will no longer wear fur and the signing of the PACT Act made cruelty to animals a federal offense in the United States. Now we need CANADA to pass a similar law making it illegal to run sled dogs to death!

MAKE A DONATION TO KEEP THIS PETITION RELEVANT! I invite you to join me in supporting this campaign to expose the truth about this deadly race. Every donation will serve to promote this petition and help to raise worldwide awareness. You can donate in honour of a loved one or a beloved pet or in memory of the many sled dogs who have died in this cruel event.

LET’S MAKE THIS A MORE HUMANE WORLD! Talk to your friends, your family, and to your students and co-workers about the desperate plight of the northern sled dogs! Encourage them to help create awareness by sharing this article on social media. Let the world know what’s really happening. With knowledge comes change. ~~> Sled Dog Racing is Inhumane!

IT’S HOWLIN’ TIME! A section of my new book “it’s howlin’ time!” is dedicated to the plight of the northern sled dogs. Available at ~~> https://www.macsbooks.ca/ and on Amazon

THERE IS POWER IN NUMBERS! The petition has now been signed by a combined total of over 108,000 people representing 167 countries on all 7 continents around the world. Let’s shoot that number up to 150,000 to let the world and the Yukon Government know we are NOT going away!

Thank you for your kind support! Say a prayer for the northern sled dogs. They deserve so much better. “When you speak for those who have no voice your soul smiles.”

Happy New Year from the Yukon! – pj johnson Poet Laureate of the Yukon